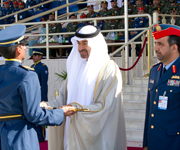 His Highness is also a member of the Supreme Petroleum Council (SPC) and the Abu Dhabi Investment Authority (ADIA). Both bodies are under the chairmanship of His Highness Sheikh Khalifa bin Zayed Al Nahyan, President of the UAE.